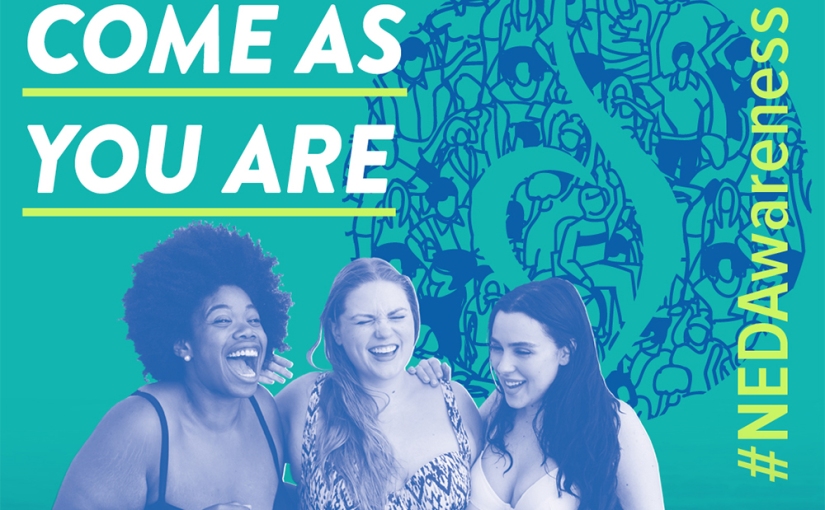 It’s National Eating Disorders Awareness (NEDA) week with the theme Come as you are… not as you think you should be. The NEDA website says that the theme was intended to improve inclusivity among eating disorders and sharing one’s story should allow people to know that their own “experiences are valid and welcome, no matter where they are in relation to food or their bodies.”

This got me thinking about the broader picture. For instance, there is a large population of people who don’t necessarily identify with having an eating disorder, per se, or have not been diagnosed with one, but rather, they have a strained relationship with food, their body, the beliefs they carry and the behaviors they partake in because of it. Hey – it’s not your fault, it’s the society we live in.

By now if you’ve been following me for any period of time, you know that I have struggled with my own eating disorder – anorexia nervosa and an exercise compulsion. I’m not afraid to share my story, so if you’re curious, feel free to go through my earlier posts or send me a comment.

I share my story because I’ve realized in my own journey of recovery that eating disorders – or any mental disease, addiction, or “problem” you may feel like you have – are very secretive and shameful. We don’t want to admit them because then we’ll be judged in some way, so we continue to feed into the disease by keeping it a secret.

How lonely, right?! So, on my journey, I understood that the more I talked about it, the less scary it felt. No longer was I totally alone because once I said, “Here is my problem. I admit it and I’m working on it,” other people were more brave to say, “Hey, I have that problem, too.”

Now, the problem with this is that I’d hear people say that they related to me, but then they’d add, “…but mine isn’t as bad/dangerous/serious as yours.” That’s where this year’s NEDA theme comes into play.

I no longer share before/after photos on this occasion because my problems look different than someone else’s. You can certainly have an eating disorder by not looking like me “then.” You can be in recovery without looking like me “now.” And, you should know that you can’t tell someone’s struggles just by looking at them – even “the skinny” disorder, anorexia.

I read this comment the other day, and it goes something like this: Even if we ate the same and exercised the same, our bodies would still look different.

As I mentioned, there is a huge population of people who figure “it’s not that bad” and so they continue to feel poorly about themselves and the cycle of eating “too much” and then not eating keeps them teetering on the edge of an eating disorder.

Or eating “clean” keeps them feeling safe, but avoiding entire food groups and choosing not to eat at all over eating something “not clean” is certainly worrisome. But because they’re functioning at a high level (maintain friendships, get good grades, no medical problems), and society says that it’s okay to manipulate their body, they’re fine. “Fine.”

Let me tell you that I didn’t intend on having an eating disorder. I never knew anyone in person who had one (publicly anyway). I never cared about being skinny or popular or fitting into a certain size within a certain time period. In fact, I was a confident kid who knew nothing about eating disorders until I was engulfed in one. I tried specific diets, sure, but didn’t everyone?

So when I began losing weight and it was applauded (more on this in a later post), and a lot of other stuff was going downhill in my life, I clung onto the last thing I felt capable of doing, which was losing weight – “eating clean” and exercising (a lot).

My journey looks different than someone else’s but what you’ll often find with people going through recovery (or are “recovered” as some people will say) or those who have said “No” to diets and “Yes” to self-acceptance, is this:

I want to be free. It’s freedom I’ve always chased. I wanted to be free from the negative thoughts, the calorie count totals (in and out) running through my mind. I wanted to be able to go to a restaurant and order whatever I wanted. I wanted someone else to cook and not feel like I had to watch what they put in the dish. I wanted to be okay with going a day or a week without organized exercise. I wanted other people to stop worrying about me.

I craved freedom so badly that I thought I’d find it in another place or in another person, job, group of friends, hobby… But, true freedom is being at peace with yourself regardless of what is going on around you – in or out of your control.

There is a lot more information out there these days than when I struggled. Losing weight isn’t always a good thing, and it’s not always a bad thing… the point to tune into is why you want to lose weight and if what that gives you outweighs (literally) what it takes from you.

I’ve updated my Resources page to include a lot of sources from NEDA. Your local school counselor or therapist can also help lead you to the help you may want and need. People want to help.

More than anything, however you come today, I hope you can be free.